A major transition is taking place in the world of displays as the underlying technology transitions from LCD to LED – and Absen is committed to accelerating the change.

Anyone who follows the display industry will have noted the progressive rise in what’s possible with LED technology. “With its superb image quality and ability to deliver a visual punch, it always had inherent advantages over LCD and projector-based technologies,” notes Borja Janariz, Corporate Industry Director at Absen.

But: as pixel pitches have continued to fall to below 2mm (making it suitable for close up viewing), a new world of potential applications has begun to open up. According to Futuresource, narrow pixel pitch LED displays saw 30% growth in 2018.

Nowhere is this growth more evident than in the corporate world, which represents over one-third of the market for narrow pixel pitch displays and saw the highest year-on-year growth". “From the lobby to the boardroom, LED displays are being put to good use to enhance communication and engagement with customers, employees and other stakeholders,” says Janariz.

The fact is that end users are favouring the improved visual performance of LED displays, with their superior contrast ratio and higher brightness. They also like the modular design enabled by LED technology, giving flexibility and almost unlimited creative scope; almost any shape and size videowall can be created. And: they’re also preferring the bezel-free design of LED displays that ensures seamless large canvasses with no interruption to content.

Those advantages have seen LED begin to replace both LCD displays and projection in many corporate presentation environments including meeting rooms, event spaces and auditoria. Presenters like it because it gives their presentations impact. Audiences like it because it’s clearly visible, especially in areas where there is a lot of natural light. And businesses like it because it has a longer lifetime (typical 100,000 hours), is easier to maintain and cheaper to service, bringing down the overall cost of ownership. Now, with many organisations undertaking a comprehensive technology refresh in order to bring their AV installations up to date, LED-based displays are finding new homes.

Establishing itself as the industry standard

So far, so good. With all those advantages, you might expect LED to have established itself as the industry standard for large displays. So what is holding companies back?

The perceived cost and complexity of LED still remains one of the main barriers to its wider acceptance, believes Janariz.

“LED-based screens are still widely believed to be expensive, especially those from household name brands - many of whom have a substantial LCD display business that needs to be protected – so they’re often only deployed in high prestige environments,” he explains. “Yes, they can be acquired more cost-effectively from less well-known brands but there can be issues around reliability, especially because the technology can often not be supported in-country – an essential prerequisite for our corporate customers.”

Add to that the perception that LED-based displays are more difficult to install, more difficult to deploy – and it becomes clear why, as yet, LED hasn’t yet achieved the market dominance its many benefits would seem to command.

Unsurprisingly, though, that’s changing. “At Absen, we believe that LED is the natural substitute for projection and LCD videowalls, offering a genuine alternative to these other technologies and bringing the added benefits of higher brightness, longer lifetime, easier maintenance, greater flexibility of configuration due to LED’s performance, usability and serviceability,” says Janariz. “We are committed to making the technology more accessible and affordable for the mass market by standardising on the technology and making it easy to install and easy to use.”

The company is well-positioned to achieve this, given the economies of scale that it can bring to bear. Absen has been the number one Chinese exporter of LED displays for ten consecutive years, producing a total LED screen area equivalent to one football field every week.

Now, in pursuit of the goals Sánchez describes, Absen has launched Absenicon – an all-in-one videowall solution that has been specifically designed to meet the requirements of corporate as well as higher education institutions. Designed not only for meeting- and conference rooms, it can also be deployed in corporate lobbies, halls and entrances as well as universities - anywhere where there is a need for a standardised high-performance HD display with a standard 16:9 aspect ratio.

How is it different? First: Absenicon establishes a surprising new level of cost-effectiveness for LED displays – but with the backing of a significant company that already has well over 30,000 installations in 120 countries around the world. It has eliminated the trade-off that prospective customers previously had to make between either choosing a reputable company or choosing an affordable price.

Perhaps more importantly, however, is the fact that Absenicon is an integrated, all-in-one solution that is simply installed by two engineers in four hours or less – a far cry from the time, effort and expense installing an LED display previously took. It’s also designed to be easy to service, with individual modules swappable, if necessary, within seconds.

Absenicon ticks all the other boxes too. Of course, it delivers the image quality for which LED displays have become renowned – as well as the wide viewing angle that means everyone in the room has a perfect view. It’s available in five standard sizes, ranging from 110” to 220” meaning that the right size of screen can be chosen for the room. It’s capable of supporting up to 4K/UltraHD resolution. It can be a multi-screen display. And it can be shared via either Wi-Fi or Bluetooth.

The implications of Absenicon are wide-ranging. Its price means that LED displays are now affordable for many more businesses. Because there is an Absenicon that’s right for any size of meeting or conference from 20 participants to 300, it enables almost any organisation to standardise its AV deployment. For universities, it allows them to create the kind of flagship lecture theatres that attract students in a competitive environment. Conference centres are increasingly leading on the quality of their audiovisual infrastructure - and LED displays represent the state of the art, creating differentiation. For corporate users, Absenicon creates meeting spaces that become a source of pride to the leadership team.

“With Absenicon,” concludes Janariz, “there’s no longer any reason not to upgrade to LED.” 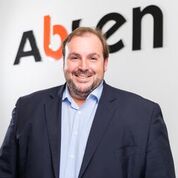 Seeing is, of course, believing. To arrange a demonstration of Absenicon and for pricing, contact sales@psco.co.uk

Why choose laser projectors for retail?

Complete the form below and we’ll call you to discuss your requirements.